Queer Films that Are All about Family 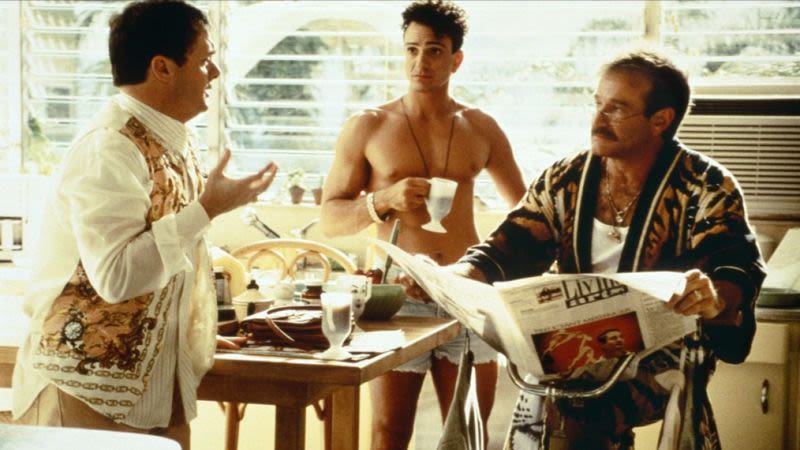 Identifying as LGBTQ+ has always had an impact on the idea of family. Whether biological families are forced to reevaluate their own biases or people find a chosen family in other members of the queer community, the relationships between families make for incredible narratives to unfold on screen.

Adapted from the 1973 play of the same name, this French-Italian farce follows a gay couple’s attempts to hide their flamboyant lifestyle from their the conservative parents of their son’s future in-laws. Still the 11th most successful foreign film at the US box office, hilarity ensues throughout this unmissable, heartfelt queer classic.

The Adventures of Priscilla, Queen of the Desert (1994)

This irreverent, wacky road adventure that takes two drag queens and a transgender woman on a pink bus across the Australian dessert has plenty of laugh out loud moments, show stopping costumes, and scenes to pull at your heartstrings. As Hugo Weaving’s Tick prepares to meet his young son for the first time, the film explores the complexities of biological family and the chosen family the central three characters have found in each other.

An american adaptation of the play La Cage aux Folles (1973), The Birdcage is hilarious comedy with another take on what happens when opposite families collide. Featuring an all-star cast at the height of their comedic powers, this film shows that great source material can make for multiple must see films.

Pedro Almodóvar’s masterpiece deals with a range of themes, including faith, AIDS, homosexuality, gender identity, and existentialism. Following a mother who watches her old son die in a car accident, the film includes an incredible cast of characters, who intertwine through their familial connections and experiences with grief, friendship, and love.

A period film and a coming of age film in its own right, the heart of C.R.A.Z.Y. revolves around the main character’s relationship to his conservative Catholic father and unruly complicated nuclear family. Partially based on writer François Boulay’s own upbringing, C.R.A.Z.Y. paints a wonderful portrait of self discovery, acceptance, and familial relationships in this heartfelt film.

Ewan McGregor’s Oliver reflects on the life and death of his father, who came out to his son as gay five years earlier and began pursuing romantic relationships late in his life. This heartfelt and humor filled story shows that there is no time limit for coming out of the closet or looking for love and is another great film to reflect on the complexities of parent child relationships.

A struggling comedian, whose sexuality has caused a rift between himself and his father, returns home to care for his dying mother in this highly comedic drama. Molly Shannon and Jesse Plemons shine in this semi-autobiographical tale about the things that pull families apart and the way illness and pain can bring them back together.