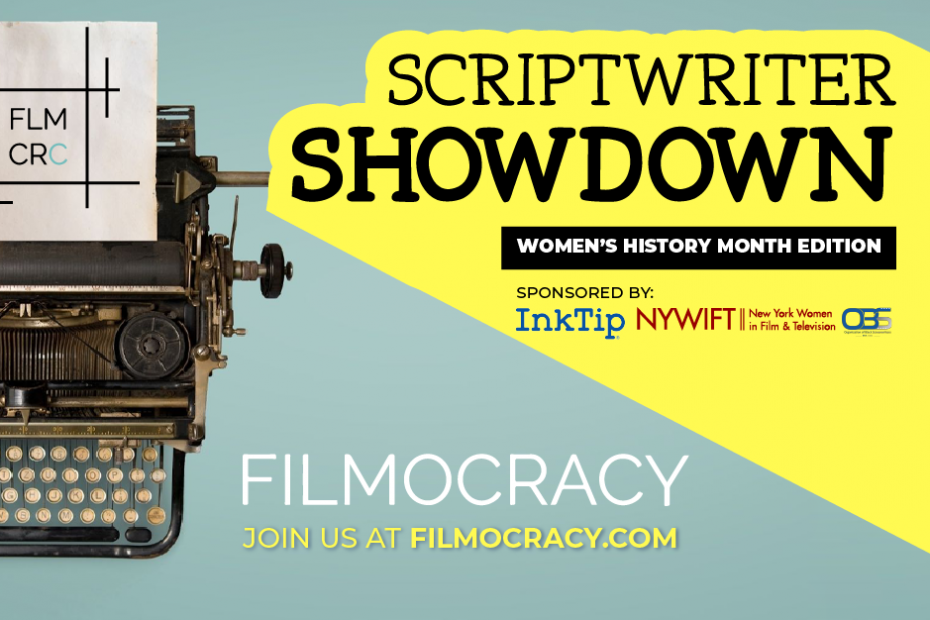 Scriptwriting has long been an underappreciated art form. Many in the industry focus on the actors and directors, but the rest of the cast and crew can be overlooked. In light of this, we set out to develop an event that accomplished exactly the opposite. We wanted to pull back the curtain on people who work behind the scenes and cast a light on them. Those who are frequently disregarded will suddenly be the center of attention. The worlds we’ve all fallen in love with were created by scriptwriters. They should not be unnoticed, but rather praised for the works they create.

With the Women’s History Edition of the Scriptwriter Showdown, we are highlighting women who are underrepresented in this industry. By providing this platform, we all get to witness their talent. Come see these 8 remarkable women create beautiful stories in an hour on Saturday, March 19th.

We asked each of the eight screenwriters four questions. They talked about their love of writing scripts, as well as their unique perspectives:

How did you discover and fall in love with screenwriting?

Diana Aydin: I discovered screenwriting through performing improv and wanting to give my characters a life off the improv stage. And then once I started writing scripts, it was love!

Vyky Saiz: My first screenwriting class at Valencia College; wish I could remember my professor’s name, she spoke about the art of screenwriting with such passion and intensity. She didn’t discourage us from our ideas, but encouraged us to craft the best version of our visions.

Tieshia Brown: I knew I wanted to be a screenwriter after my grandmother passed away. It was an outlet for me.

Jeri Jeannine Marshall: My screenwriting journey started in 2018, when I happened upon Adult Swim’s Boondocks. I was drawn to the diverse representations of black characters, but noticed a lack of female representation. It dawned on me, if I wanted to see more black women represented on screen and television, I should create them. So I put my creativity to the test, and took a TV writing class at Second City in Chicago. The rest is history. Shortly after, I was accepted into the Harold Ramis Film School immersing myself in Comedic Storytelling.

Shannon Fewster: Writing is in my blood. My parents taught me that a bookcase is a series of portals to every world you could possibly imagine. I can’t even remember when I started writing my own scripts… some survive. I read them occasionally and they’re unintentionally hilarious (and no, I will not be sharing them.)

Marjory E. Leposky: I was a media-production major at Florida State University. While sitting in a class, I got an idea for a feature film script — but I didn’t yet know how to write a script. I wrote myself a note about the storyline. Several years later I finally had an opportunity to take a scriptwriting class.

Leandra Terrazzano: I’m also an actor, so I learned the importance of a script and its words early on. Writing was something I liked but felt intimidated by until I really made a habit of it, no matter how many or how little words I wrote in a day. And coming from the industry as an actor first where it’s easy to feel like you’ve got little to zero control, writing was something I could do on my own terms. Creating an entire world and bringing it to life?! It’s both nerve-wracking and exciting.

Danielle Evenson: Nora Ephron and her journey via Heartburn was life-changing.

What do your scripts uniquely bring to the world?

Diana Aydin: My scripts tackle subjects, from illness to family dynamics, in a lighthearted and zany way. And I bring my unique comedic voice and point of view—as a Syriac American, a daughter of immigrants, and a brain surgery survivor (yes, brain surgery!)—to my characters and storylines. I like to create worlds where MRI and hummus jokes live in harmony!

Vyky Saiz: A voice that is always working towards a common ground between others’ perspectives of the world and my own.

Jeri Jeannine Marshall: My scripts uniquely bring flawed but relatable characters and a strong point of view. Whether I’m writing a dramedy, satire, or horror, I seek to find both the humor and heart of the people I create. Within every villain, lies a scared five-year-old, and in every boy or girl scout, there’s a dark side waiting to come out. It’s in all of us, and I strive to make that reality come to life on the page. I always want my audience to walk away with a strong sense of who my characters are.

Shannon Fewster: Since my struggle through depression I just try really hard for a blend of realism and optimism. I love to use my work to explore the ways in which humanity and technology interact. I strive to be the spark of inspiration for women overcoming inherent biases and discouragement if they are being told “this is not for you” based solely on their gender.

Marjory E. Leposky: My scripts are entertaining, and at the same time they make people think about the issues.

Leandra Terrazzano: Anything goes in most of my stories and I love a good dose of suspension of disbelief. My scripts hopefully transport while staying relatable enough to connect with my audience and I plan on making more room for female and female-identifying voices to be heard.

Danielle Evenson: I like to think I uncover and write stories about people (specifically women) that most folks have not heard before. In success, I hope to make space and work for other female creators.

Where can the industry improve in bringing women’s voices to the world?

Diana Aydin: I would love to see more mentorship opportunities for new screenwriters who perhaps don’t have a ton of experience, but have great stories to tell.

Vyky Saiz: Make an unpitied effort to have us in the room and constructively engage with us when we speak.

Tieshia Brown: Continue to do events such as this with women. Maybe make this a monthly event.

Jeri Jeannine Marshall: It’s exciting to see the industry creating opportunities for the future Issa Raes, Lena Waithes, and Mindy Kalings. We can take it a step further allowing women of color to tell stories, BEYOND race, gender, and culture. After all, we are humans first. I’d love to see women like myself just being…people. As a black woman, naturally, I create characters who share my identity, but my storytelling isn’t limited to that. Within a single demographic, there’s still diversity. Women of color have a range of personalities, ideologies, and lived experiences like anyone else. It would be refreshing to see stories that reflect our individuality, in addition to our cultural similarities. But first, we’ve got to get these diverse individuals in the writers’ room.

Shannon Fewster: There is a lot of pressure on women and girls to be nice, agreeable, sweet, smart, and caring with the added responsibilities of looking out for others, maturing faster than boys, guarding and repressing our sexuality all while looking hot. The antidote to that perfect selfie is content featuring rebellious, gross, irritating, depressed, harassed, flawed, traumatized, “unlikeable,” complex, and utterly human representations of women who go out and get what they want!

Leandra Terrazzano: Speaking of women’s voices! We’re on the path to inclusive representation and I believe the industry can continue to make room at the table for underrepresented voices to tell their stories. This is not a matter of either or though, it’s an AND situation. I refuse to give in to the lie of scarcity. There’s room for everyone’s stories to be shared. We’re all creative beings and supporting one another’s work without fearing that yours may get taken away, is important.

Danielle Evenson: Really understanding that women’s voices are diverse and that having one “girls’ show” on a development slate or one night of programming is just the beginning of creating a supportive, inclusive, and successful place for women to thrive and an audience to engage.

Want to watch the screenwriters for FREE?