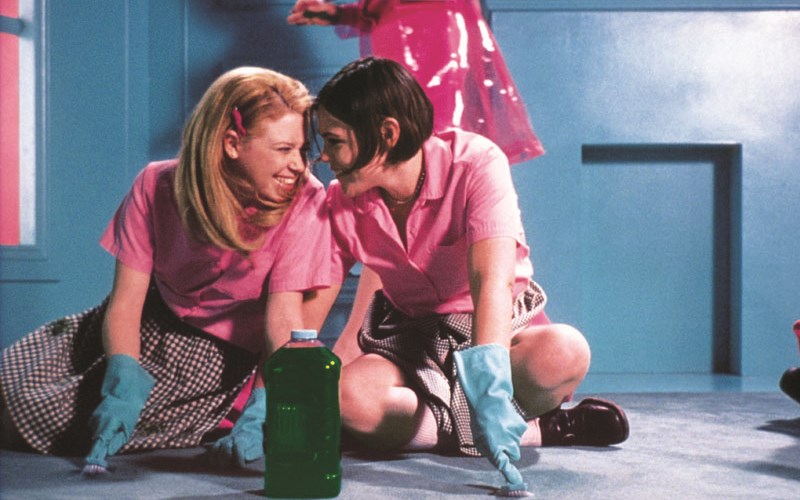 Sometimes there’s nothing better than a film that makes you laugh and leaves you smiling so we’ve put together a few that can turn any bad day around. Many amazing films that deal with the challenges of identifying as LGBTQ+ depict painful experiences, but it is equally important to put triumphant and joyful queer love stories on screen. Look no further than the list below to celebrate Pride month with some of our favorite rom-coms and feel good classics.

Although Los Angeles doctor Zack (Michael Ontkean) is happily married to television executive Claire (Kate Jackson), he finds himself struggling with his increasing attraction to other men. These feelings boil over when he meets a new patient, the openly gay and hedonistic Bart (Harry Hamlin), with whom he begins a tempestuous and emotionally draining affair. His infidelity throws Zack and Claire’s marriage into turmoil at a time when they had been discussing starting a family.

Desert Hearts is a 1985 American romantic drama film directed by Donna Deitch. The screenplay, written by Natalie Cooper, is an adaptation of the 1964 lesbian novel Desert of the Heart by Jane Rule. Set in Reno, Nevada in 1959, it tells the story of a university professor awaiting a divorce who finds her true self through a relationship with another, more self-confident woman.

Megan (Natasha Lyonne) considers herself a typical American girl. She excels in school and cheerleading, and she has a handsome football-playing boyfriend, even though she isn’t that crazy about him. So she’s stunned when her parents decide she’s gay and send her to True Directions, a boot camp meant to alter her sexual orientation. While there, Megan meets a rebellious and unashamed teen lesbian, Graham (Clea DuVall). Though Megan still feels confused, she starts to have feelings for Graham.

Jessica (Jennifer Westfeldt) is at the end of her emotional rope. She happens upon an intriguing personal ad, whose only drawback is that it’s in the “women seeking women” section. On a daring whim, she decides to answer it. She meets funky downtown hipster Helen Cooper (Heather Juergensen) for drinks, and to her surprise, they click instantly. With conventional gender roles absent, the two women proceed to muddle through an earnest but hilarious courtship, making up the rules as they go.

During her wedding ceremony, Rachel (Piper Perabo) notices Luce (Lena Headey) in the audience and feels instantly drawn to her. The two women become close friends, and when Rachel learns that Luce is a lesbian, she realizes that despite her happy marriage to Heck (Matthew Goode), she is falling for Luce. As she questions her sexual orientation, Rachel must decide between her stable relationship with Heck and her exhilarating new romance with Luce.

Everyone deserves a great love story, but for 17-year-old Simon Spier, it’s a little more complicated. He hasn’t told his family or friends that he’s gay, and he doesn’t know the identity of the anonymous classmate that he’s fallen for online. Resolving both issues proves hilarious, terrifying and life-changing.

A high school senior plans on losing his virginity to his girlfriend. Things get complicated when he meets a handsome and charming gay kid from the other side of town who unwittingly sends him on a roller-coaster journey of sexual identity.